When your boss gives you a project and says to do whatever you want with it, that can give you the impression to set the bar really high. I did just that for trying to analyze the Carnegie Library Wi-Fi data. I wanted to do a super cool year-by-year visualization or a stacked bar graph that compared each library month-to-month over different years. Though I am a writing major and not a computer science person, I like to consider myself “knowledged” in Python (if that is even a word) such that I can make cool graphs. And I can — just not as cool as I’d like. Taking one class about coding that only spends half the time teaching Python only gets you so far, but here I am!

Above, you can see my first attempt at a cool graph, the very first thing  I did with the CLP Wi-Fi data and what I’m most proud of. The boss tells me that data should tell a story, and at first, I struggled to figure out what story this graph told. One thing that I assumed of this data is that some type of trend — be it positive or negative — would appear in the summer. Students leave school for the summer and all the work-o-holics start taking “sick days” to take their kids to the pool, so I thought there might be a decline in library patrons. Conversely, I thought there could be a spike in library patrons in the summer as parents bring in their children for activities or students decide to visit for non-academic reasons. But this data doesn’t support either of those conclusions, to my surprise.

So another, more obvious visual story lies in the simple fact that the main library in Oakland falls so far ahead of its sister libraries in Wi-Fi minutes. Just look at how much higher its line is on the graph. This can be explained by a few reasons, the first one being that the Oakland library is the biggest library in the area with the most resources in it. Not to mention that students in the Oakland area — including Pitt, CMU and Carlow  — use the Oakland library as a study space or just as somewhere to escape the hustle and bustle of normal campus. This library is used year-round by students, families and casual readers, unlike other libraries that aren’t as centrally located.

To fairly show the data from the other years represented in the data, I ended up making a pivot table. While it’s not a super awesome graph, I will chalk this creation up as a victory anyway because before this project I didn’t even know what a pivot table was. So yay, I learned something! This table shows each library’s average wifi minutes per month, separated by year. 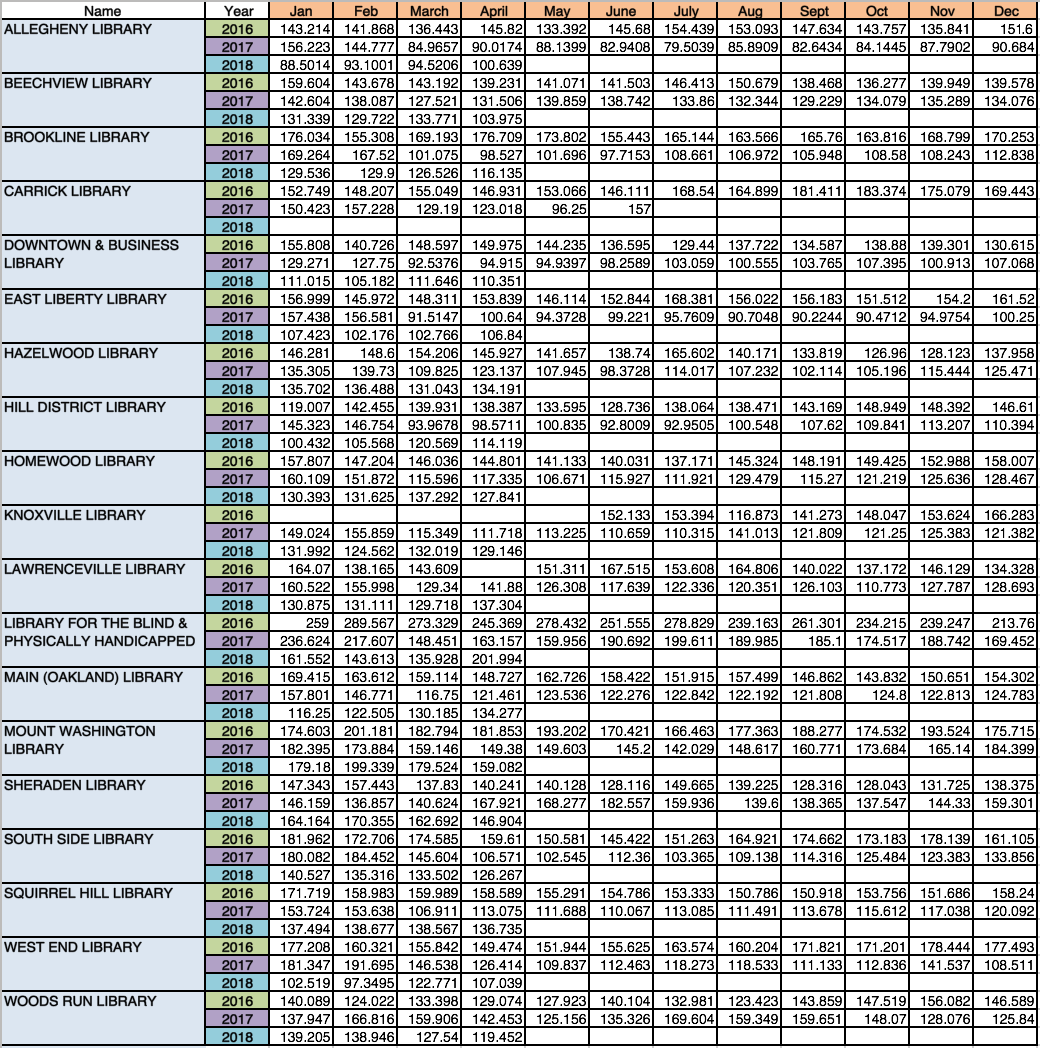 Reflecting back on this endeavor, I’ve re-learned something that I already knew about myself: I’m stubborn. I looked at this data once, said to myself, “This is what I am going to do with it.” And once I couldn’t do exactly that, I got stuck. My brain, like, froze, resulting in me just staring at this data for the past two weeks. When I do a visualization project like this again, my strategy is definitely going to be to brainstorm more than one coherent goal so that way if I get stuck again, I have alternate options.