Allegheny County recently made two notable datasets related to health available as open data. Allegheny County is able to access data through the Pennsylvania Vital Statistics Database. The Commonwealth’s Department of Health collects data on births and deaths by place of residence for all of these events in Pennsylvania.  Births occurring over a five-year period were grouped to smooth year-to-year fluctuations and reduce the risks that individuals could be identified in the data. Totals of less than five births and deaths have also been suppressed to address reidentification risks. In this post, we’ll share details about what you’ll find in the data, and offer some ideas about how you can use the data.

The birth outcomes dataset includes two different files – one at the County level, and a second with data available at 2010 Census Tract geographies. The data by Census tract includes the total number of births and data describing several different birth outcomes, including:

The countywide file provides data on all these outcomes disaggregated by race and ethnicity, and includes data on the numbers of births by age and race of the gestational parent.

The mortality data also contains two files. The Countywide file contains counts of people that died from 2014-18 by primary cause of death, age group, and race. The tract data includes only total deaths by race (Black and white only), and total deaths by cause of death. Our COVID-19 data guide includes information about how deaths are reported and recorded in Pennsylvania. Causes of death included in the data are:

How the data can be used

This data can be used to better-understand how the communities where people live, work, learn, and play impact health and well-being. Access to quality healthcare and educational services, the neighborhood and built environments, social and community contexts, and economic stability are several of the key social determinants that are viewed by the CDC as attributable to health outcomes and risks. Many of the datasets on the open data portal can be used to explore social determinants in communities across the County. For example, the map below shows the percent of births that were underweight, or under 2,500g. 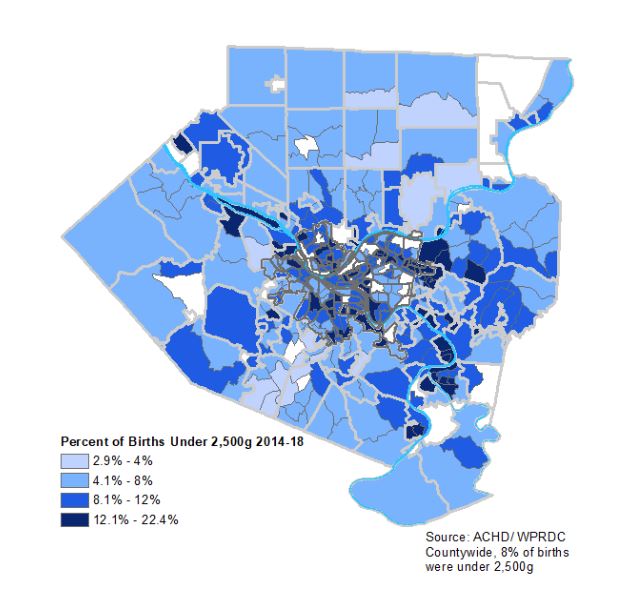 Birth and mortality data can also be used to understand some of the drivers of neighborhood population change. The map below shows the 2014-18 population gains and losses in each Census tract attributable to natural change (deaths-births), overlaid with municipal and Pittsburgh neighborhood boundaries. 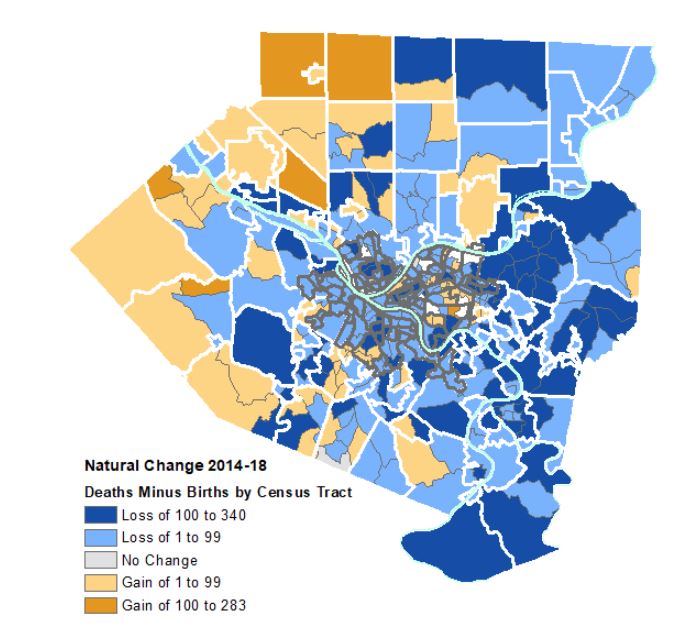 Disclaimer: These data were provided by the Pennsylvania Department of Health. The Department specifically disclaims responsibility for any analyses, interpretations, or conclusions

Note: Data on deaths due to homicides, overdoses, and suicides may differ between this data and what is reported in the DHS Community Profiles dataset, which includes totals provided by the Allegheny County Office of the Medical Examiner.